It seems as if each book and each movie portrays vampires differently. Most of the time, these paranormal creatures are very pale, bone cold, have fangs, are undead, sleep in coffins, and so on and so on.

Of course, we all know the Twilight series broke away from the usual vampire depiction (ie: they sparkle, they have no fangs, they somehow manage to produce offspring). But I’ve come across some other vampires who broke the mold on how a vampire should be.

Most notably in my case was Sita in Christopher Pike’s YA series, The Last Vampire, or Thirst, as it is known these days. Sita was a 5,000 year old vamp who is able to crush boulders, jump very high, has rather sensitive hearing, and can move around in the daylight, though not all day long. 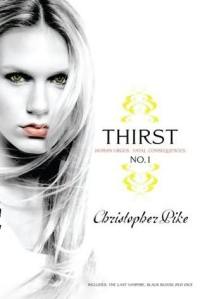 She also does not need to survive on blood each and every day of her existence and can consume human food and drink. Sita also does not sleep in a coffin and doubts she is dead because at one point, she mentions hearing her heart beat loud in her ears (I believe that was Chapter 1 of the first book that mentioned this).

The Last Vampire had an effect on me, even though I last read those books back in junior high. Whenever I imagined or wrote about a vampire, Sita’s characteristics played a role on how I depicted the vamp. When I decided to write seriously and not just for fun, that influence remained.

Even when I wrote my forthcoming E-book, The Dark Proposal. I had the vampires in my novel not sleep in coffins and were able to eat and drink regular food, though they really didn’t have to. Furthermore, my vampires can move around in the daylight. However, that depends on how old they are and the weather conditions outside. If it is cloudy and rainy out, they can walk around in midday. The same if the sun is just rising or going down.

But how do they deal with the sun if they don’t sleep in coffins, you ask?

Well, they sleep in beds like you and I do, but they block the sun with heavy duty curtains from Sweden, a country nicknamed the Land of the Midnight Sun.

But, my vampires maintain the traditional depiction of these characters. They are very pale until they drink blood, which they need every night in order to survive. They are also very strong, are able to read and manipulate minds, and can move in nano-second speed.

So I blended the traditional characterization of vampires along with the nontraditional. I think if someone wants to write vampire fiction, they don’t have to strictly stick to tradition; they should feel free to break away a bit. This way the author gets to have more fun and create their own world rather than stick with convention. But they should only break away a little bit 😉