I have a few actor friends and sometimes they tell me about their craft. They talk about getting into character and trying to understand the thoughts and feelings of that person in order to bring them to life. When I hear them describe this process, I can’t help but notice the similarities between writing and acting. 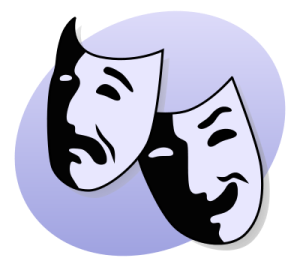 Now, writers don’t perform in front of an audience. Whatever “performance” we do is done when someone reads our work, usually unbeknownst to us. We don’t know of their reaction until they leave a review somewhere, if they do.

For actors, they don’t need to bring to life the whole scene with the description of whatever place a scene is taking place in or the vibe in whatever room. They’re responsible for bringing to life their characters.

But for us writers, so are we.

When I write my characters, I do feel as though I have to get into not only their heads, but their skin. I need to feel their feelings, know their life history, know their thoughts in order to make them come to life. I analyze my characters – especially the main ones – similar to my actor friends. I need to understand them in order to make my readers understand them.

When it comes to villainous characters, some actors say they have fun playing the bad guy. Judging by some performances, they do appear to enjoy themselves. I didn’t enjoy writing Daniel like that. That’s because to me, he is not a villain to have fun writing about. I have plans to do that for other villainous characters in my vampire trilogy. However, I didn’t totally hate him. I mean, yes I did, but I had to understand why he was the way he was and why he did what he did in order to tolerate him. Even now I do that. I guess writers and actors have to take a neutral stance sometimes with their characters in order to tell a story.

So, I take it this is another sign that writing is an art.

How about you? Do you see the similarities between writing and acting, or is it different for you?

NOTE: I won’t be posting this Friday, as it is the Thanksgiving weekend here in the U.S. To all my American readers, have a Happy Thanksgiving!