Hi everyone. Sorry that I haven’t been posting much this month. The holidays are always crazy, and I’m sure many of you can relate. There’s the shopping, parties, checking out the holiday sights, and all the good stuff that take away from other things you have to do. But I’ll be back to my usual schedule in January. 🙂

So, this entry is just another one where I chat about TV shows. There’s so many great shows (or used to be great shows) on TV these days, so there’s no way I cannot discuss them. Plus, the Golden Globe nominations were announced so I need address that… 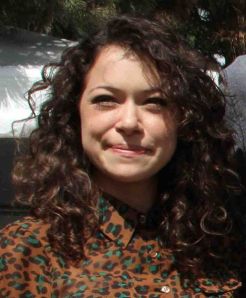 …especially since I am so glad that Tatiana Maslany has been nominated for Best Actress in a Drama series for her amazing work on BBC America’s “Orphan Black”! I’m thrilled she got that recognition, especially after she was snubbed by the Emmys. Tatiana may not win because she’s not famous enough, and she is up against more well-known actresses like Juliana Margulies. But I’m just glad she’s been nominated.

So, I am still watching my favorite network TV show, “Once Upon A Time”. Unfortunately, I’m starting to wonder if it is slowly jumping the shark. I felt this season started out very well and I had high hopes that it would redeem itself after the it’s weak second season. But the episode that aired this past Sunday has me wondering if the writers have lost all direction. The show just doesn’t make anymore sense and this new twist in the show – with the curse being reversed, everyone going back to the Enchanted Forest, while Emma and Henry stay in our world with no memories of Storybrooke – is so mind boggling that I can’t make sense out of it. I feel like the writers have gotten themselves into a huge mess and are desperately trying to make sense of their initial concept, but they are not doing it well at all. I’ll be nervous when the show returns March 9th because this was a very good show, and it has sunk very quickly.

Luckily, early next year another show of mine is coming back – “The Americans”! I initially watched it on FX because the actress, Keri Russell, was on the WB series, “Felicity” back when I was in high school and that was my favorite show back then. But “The Americans” is pretty good, and I’m looking forward to Season Two. Here’s an awesome promo:

Then comes “Vikings” on History, and not long afterward, “Game of Thrones”. Yes, can you believe I’m anxiously waiting for Season Four? Hey, that show is addictive!