As I work on my WIP “The Cats”, I notice that I seem to be repeating a familiar characterization of my main character, which happens to be female. Instead of writing a kick-ass, strong female, I’ve made mine, once again, timid and unable to fully stand-up for herself. Am I starting a trend in my stories?

What does this mean? Am I against strong women? 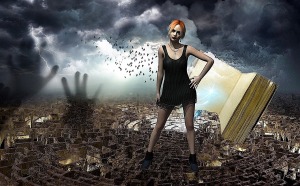 I also have story ideas where the female character is done right evil and does terrible things. Does that make me an anti-feminist? Again, far from it! I just believe in capturing the human race as it is. Women can be awful just like men, or be spineless as anyone else. That doesn’t mean that I am against women being strong or good. I just know from life’s experiences that women can be weak or evil, just like men.

I’m aware that many readers prefer strong characters, especially when it comes to women. I know that means I may lose readers or not have a huge bestseller if I stick to my formula for female characters. Hey, I may not even get a book deal with a major publisher that way. But I truly believe writers should write what is in their heart’s desire, rather than what is popular. I’m also someone who cannot write what is in my system, so I cannot write something that is trendy or would be a worthy bestseller. It just wouldn’t come natural, and I would be bored writing the story.

So, writing not-so-strong female characters looks to be the norm for me. Maybe that would be the theme for my characters during my authorship, as in, it would be something I would be known for. And I like that 🙂