Happy (belated) New Year everyone! Sorry I’ve been off the radar lately. I was overwhelmed with end-of-the-semester work last month, plus I had flu-like symptoms. Then came the holidays and all the craziness that comes with it.

But here I am, and I have a little update for you regarding my WIP, the sequel to “The Dark Proposal”, “Between Light and Dark”: I have about two or three more chapters left in my draft! Isn’t that exciting?! There’s been a lot of blood, sweat and tears with this book, so I am thrilled to have gotten so far with it. 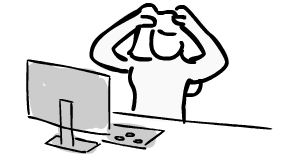 However, there have been times when I wondered why I was writing this story and putting so much effort into it. That led to me asking myself, ‘why do I write?’

Seriously, why do I tear myself apart over something like this?

Now, the first simple answer is, because I can’t not write.

Honestly, that is what drives me to some degree. I am constantly filled with story ideas and have been since I was a little girl. The slightest moment in life, song, TV show, movie, scene in a book, etc., can set off excitement in my brain as I think about a story idea I’ve had in my head since God knows when. Or it could give birth to a whole new story idea. And if I don’t write them down, I might actually burst. It actually feels that way.

OK, so that’s half the reason. That’s like the creative, spiritual-ish reason. But what is the more logical reason?

The logical reason would because I have something to say. When I wrote “The Dark Proposal”, I had something to say about abusive relationships and evil vampires. When I first set out to write “The Cats” (which I’ve set aside), I intended to address bullying. There are some things that need to be said and some things that need to be explored. That is the logical, more down-to-earth reason why I write.

And I plan to do a lot of writing this year. Once I finish “Between Light and Dark”, I am going to take a break from “The End of Eternity” trilogy, and go back to “The Cats”. I also intend to jump on the screenplay bandwagon, and work on a love story idea that has been nagging me for a while. And then I have other ideas for novels and screenplays.

So many ideas, so little time it seems.

But it is still January, and I have plenty of time to get these three writing projects off the ground. I fully plan to make writing stories my career someday. Hopefully, I’ll be able to do that, though it would quadruple the amount of blood, sweat and tears that I am currently experiencing. Writing a story is hard work, and there’s no easy formula to it. Sometimes I feel like I’m crazy for wanting to do all this.

But I also know that I can’t imagine doing anything else.

In other words, I didn’t choose to write – writing chose me. Frankly speaking, but it certainly feels like that.

So, getting back to my first reason – I can’t not write – no matter how often I want to give up, I know there’s no else in the world I’d rather do.

And I’m pretty sure you know what I am talking about.

It had been on my mind for a little while, and took a good butt kicking to get the drive going again. But I am glad that engine is roaring once more, and I doubt I am going to look back.

I am once again working on the sequel to The Dark Proposal.

Yeah. I’m certain some of you are rolling your eyes now.

After stopping, restarting and stopping again, I am giving it another go. And this time I am going to go all the way with it.

The last time I stopped was, as I explained, mainly for financial reasons. As much as I wanted to keep working on the sequel, I was concerned about how expensive it is to self-publish. But after doing a little research, I found it is not that unusual for writers to do crowd-source funding for their work. And that is what I plan to do. By the time I am done with the first draft of this book, I will start a campaign to raise money to get my book edited, get the cover made, and a few other promotional things to get the word out about it. But that won’t be until the fall, perhaps.

Some of you might be thinking that I am struggling with the main character, Claire McCormick, because I portrayed her as insecure, naive and kind of foolish, which is not easy to follow-up to in the sequel. While my intention was never to make her a strong, kick-ass female, I am finding ways to develop her strengths as well as have her face her weaknesses. Claire’s story is about personal responsibility, which ties in with the vampires’ story.

Some of you may also be wondering about my other WIP, “The Cats”. That I am setting aside until I complete my vampire trilogy. I may work on it from time to time, but my priority is my vampire stories, so once I complete them, then I’ll continue on with “The Cats”.

Yeah, being an author can be a mindboggling thing. You have to weigh-in writing what you want versus what makes since business-wise. After all, writing books is a business, whether you self-publish or go the traditional route. Money talks, and you have consider how you’re going to spend your money, or obtain the funds, to get your work out to the world. But sometimes passion talks to, and if it’s in your gut to write something, or finish something, than there are times when you have to give in. Besides, going with your gut works all the time.

So, without any further ado – onward with the sequel to The Dark Proposal.

BTW, I’ve already given it a working title: “A Light in the Darkness”.

I’ll be the first to say that I am a Spreadsheet Queen. I can’t live without spreadsheets. Whether it is to keep track of finances, freelance work, or plans for the summer, spreadsheets is the way to go for me, and likely for many other people.

That probably also includes fellow authors outlining their next book. Some authors choose between outlining or flying by the seat of their pants when it comes to writing. I myself have debated this issue. But lately, due to my crazy schedule, I find it best to outline. And I’ve made that possible for myself through spreadsheets.

How do I outline using spreadsheets? Simple. I make each column represent each chapter. So when you see my sheet, you’ll see Chapter 1, Chapter 2, Chapter 3… all lined up in columns. Next, I put the scenes of each chapter in the rows. This is a good way to figure out which scene should end or begin a chapter, or which scene belongs in which chapter. 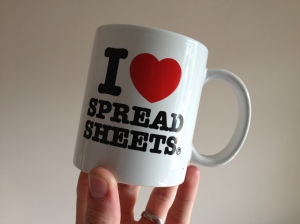 Photo by Craig Chew-Moulding on Flickr via Creative Commons

Doing this has made the planning of my sequel very easy. Granted, I do not stick to it religiously; I have moved a few scenes around and added a few more without consulting my spreadsheet. But overall, spreadsheets has been helping me keep track of the scenes of my second book.

It is not unusual for authors to use this to help plot their books. JK Rowling plotted her Harry Potter books using spreadsheets, and I’ve seen a few other, less-known authors do the same thing.

Because life can be so busy sometimes, I recommend authors to outline their stories. It is too easy to come up with an idea, only to not be able to write it down because either you’re at work, going to or from work, or busy with home life. Also, writing is a discipline, and if you are working on a book, you need to be organized and professional about your craft and your story. I was not like this when I wrote my first book, but then again, I was unemployed at the time. That meant having plenty of time to write whenever I pleased, as much as I wanted.

Nowadays, I do not have that luxury and I have to rely on spreadsheets to make my next book possible. It is funny how being a professional these days has made me rely on a program intended for professionals, in order to be more professional with my story!

Raise your hand if you use spreadsheets to help organize your story!