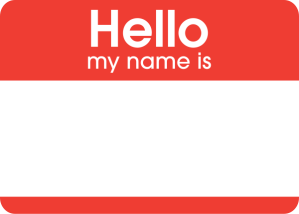 very carefully, especially if they are an important person to the story.

But what happens if I need to come up with names of some of the characters? As in, they are from another world, dimension or time period almost forgotten to history?

When writing my book, I came up with the idea that the first vampires would be millennia old. That meant I would have to invent names for them. This required a little creativity and consideration on my part.

When I read books where the characters have invented names, I think it is imperative that the names are simple enough to pronounce. I don’t like it when authors create names that sound more like gibberish than something where some thought was put into it.

I also think that if by chance the invented name(s) may be difficult to pronounce, I think the author should provide a pronunciation guide at the beginning or end of the book. I simply don’t want my readers to be confused or annoyed if they are stumbling over names.

But not all authors do this. The author of the Kushiel’s Universe series, Jacqueline Carey, doesn’t have a pronunciation guide in her books. Instead she explains this on her website: I’d rather let each reader decide what sounds right to his or her own individual ear than dictate it to you.

I like that idea a lot, but I feel like I owe it to my readers to understand how to pronounce invented names. Maybe in future books I wouldn’t do this, but now I feel like I should.

Which sounds a bit hypocritical because I never explained how the names of the original vampires, the Five Brothers, in “The Dark Proposal” are to be pronounced. Part of me felt like I should’ve done it, but I told myself that they are secondary characters, so don’t worry. No one has complained or asked questions. But if anyone wants to know, feel free to drop me a line.

But for those who wonder how I came up with their names, I’ll explain. I was inspired by other languages and names from other cultures. Sometimes I took a name or word, and tweaked it to make it more original. Or I actually did take a name from a lesser known culture, mainly because I liked the way it sounds and/or the way it looks spelled out. And on some of the names, I actually did make up a name off the top of my head. But I didn’t base that name on gibberish. Instead I came up with something easy to pronounce with a touch of a foreign language to it.

Names are fun. Making up names is fun too. But my belief is not to have too much fun and to remember your readers.

I’m curious about your thoughts on this. As a reader, writer or both, how do you handle invented names?