Tomorrow marks Easter Sunday, a major holiday for a lot of people. It also marks the series finale of the oft-discussed HBO series, “Girls”. After 5 years and 6 seasons, the brainchild of millennial superstar Lena Dunham is ending. If you watch the show, like I do, you are probably feeling down that “Girls” is ending.

I have watched the show since the beginning. I have to be honest and say that I have had a love/hate relationship with it. There were times when I thought “Girls” was a parody of millennial women. But then I realized I knew people who reminded me of Hannah, Marnie, Jessa and Shoshana, and that made me realize that the show was more realistic than I wanted to believe. That was when I despised the show because the characters were largely unlikable for numerous reasons. Hannah was self-absorbed. Marnie was a narcissist. Jessa was a trainwreck. And Shoshana was just plain annoying. I always hoped that either girl would wise up and grow up, but that never seemed to happen. Yet I could hardly tear my eyes away from each episode.

But this season seemed to showcase what the point of each character was, especially the ninth episode which aired this past Sunday. It was the part where Hannah and Jessa were making peace seemed to sum up this entire series. Hannah told her former-best friend that she was simply doing her best. Jessa responded by saying that her best was awful.

Those two lines seemed to click something in me, and perhaps other viewers. What Lena Dunham did with her female characters was make them as complex as possible. Many people have complained about the characters as unlikable whom could not be related to, yet there were many who saw themselves or people they knew in these four young women. So Lena Dunham was doing something right. And what she did right was create complex, human beings for her show. Neither of the four characters were perfect. In fact, they were far from perfect – totally far!

But then again, aren’t we all?

Aren’t we all just trying our best in a complex world that hands us situations where we have to choose to right moves, that often aren’t for the best or may be the worst? We make mistakes, even though society largely scolds us all for making them. We handle life by the best way we handle them, as far as our self-awareness, intelligence and strategy skills allow us to. And we do what we can. Hence why we are all complex, even us women.

That’s my takeaway from “Girls”: it was a show about complex women who were neither good nor bad. They had their pluses and minuses. They had their smarts and their dense moments. They were simply human. Human beings trying to make it in New York and having their romantic relationships along the way.

I say Lena Dunham did a great job portraying complex young women for her series. I hope to do the same thing for my stories where I aim to write about complex characters who are also neither good or bad. No one really is, except psychopaths who are 100% evil. But anyway, complexity is fun and is easier to relate to. I give Lena Dunham credit for taking that risk, especially with young female characters. Too often, female characters lack complexity. I feel as if Lena broke that mold.

So, this Sunday, I will watch the grand finale of “Girls” and get all sentimental that it will be over. But I will also feel glad that I watched the show, and took part in a major cultural event.

For those of you who watch HBO’s “Girls” – or at least follow the criticisms of it – you might have heard about last night’s episode. Titled “Boys”, it followed two of the male characters, Ray who is Hannah’s boss and Shoshana’s boyfriend, and Adam who is Hannah’s ex-boyfriend. Because Adam had a dog he stole or borrowed or whatever, the two decided to return the pooch to it’s owner – who lives on Staten Island. 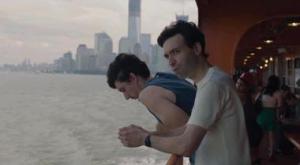 Click here to see a local reaction to that “Girls” episode via SILive.com

Ah, Staten Island – my hometown. Some people here love it, others hate it, while the remainder are neutral. We are the Forgotten Borough in so many ways, and only received national attention when Hurricane Sandy ravaged us last October. So when the Island gets lengthy mention on the news or even a movie or TV show, I take notice – which I did last night during “Girls”.

At first I was tickled pink to see Adam and Ray enter Whitehall Terminal to take the ferry. But as I watched their adventure on the Island, I raised raised one eyebrow sometimes, but other times it was both. Here is my reaction:

Adam and Ray’s verbal assault toward Staten Island was…amusing at times. It really didn’t surprise me. Many people who don’t know Staten Islanders or haven’t really been here (using the ferry or driving through via the Expressway does not count) say practically the same things about the borough. We are looked down upon. We are seen as the “armpit” of New York City. Just go to the comments section of the Huffington Post whenever it reports on the Island – the attitudes people have are no different from last night’s episode of  “Girls”.

This line from the show, spoken when Adam and Ray are walking down a street after getting off the ferry, speaks some truth: “All these people, they want to live in Manhattan but they end up on this … weird little island watching the city in the distance with this quiet rage burning in their hearts.”

Is that overall true or false? No. There are some Islanders who do wish they lived in Manhattan, or even Brooklyn’s hip neighborhoods of Williamsburg, Park Slope or Greenpoint. For some, and I confess I am one of them, Staten Island is not a good place if you are 30 years old and single. I believe this place is good for those who are married and have kids. It is a more family-friendly borough compared to the other four, but not so much if you are not at that stage of your life. Others may not agree with me, but that is my experience.

But our island is not weird. There is no quiet rage burning in our hearts. Many of us accept our corner of the world as it is, and some wouldn’t want to live in the other boroughs. Seriously, what is weird about Staten Island? Has anyone actually been here? (Again, using the ferry and the Expressway does not count)

Finally, the girl who was the dog owner’s daughter was embarrassing to watch, for two reasons. One, it was pretty lousy for the writers of “Girls” to think we are all shallow, foul-mouthed bigots who do nothing but party at Webster Hall. But honestly…there are some – SOME! – who are like that here. It is sad they give off this image of Staten Island.

But again, that stereotype is not so true. In fact, a lot of what was said about Staten Island was not true. We have a huge mix of people of various attitudes, interests and intelligence here. To say we are all low class fools who envy Manhattan and are trapped on this “little weird island” is unfair. Basically, it is the attitude of New Yorkers who know no one or nothing about the borough, as well as though who don’t live in the area, but heard through the grapevine about our stereotypes.

It really sucks that this is how Staten Island is perceived by others. I hope the way we were portrayed by the media after Sandy will enforce a more positive attitude about us. By the way, that “Girls” episode was written and filmed before Sandy hit – hence the summery look of it.

I mentioned once that I would like to help make my hometown look better through my books. While I have no intention of sugar-coating or using novels as an excuse to portray the Island, I will use my work as an opportunity to let readers know about the Staten Island I know. No, not all my future work will take place here nor will it overindulge in talking about here (my book, The Dark Proposal, partially takes place on Staten Island, but it is not a tour guide). But I will do what I can to give my hometown justice.

Because after all, this is not really that bad of a place 🙂