Everyone has an opinion on just about everything – even the emotionally charged topics that fall under the politics and religion category. I’m sure we’ve all heard that we should stay away from those topics when discussing them in public, especially with people who may not know about your views, and could easily be upset by them.

Well, the Internet is a public place and anyone could see your opinion if you voice it on a blog, a forum or on social media. You could make a simple comment about anything, and then some total stranger starts verbally attacking you in response. If you stick to your guns and make it your mission to discuss something like, same-sex marriage, gun control, abortion, NSA and so on, you could develop a reputation online. The good thing about that is, you’ll get a following of supporters and meet others who agree with you. The downside is you’ll get hate mail and maybe even be stalked online, or even in person! 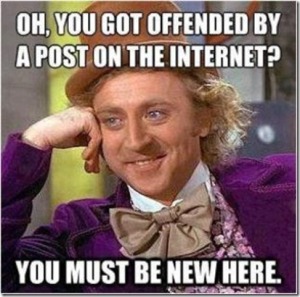 Now, what if you have a business, a brand to promote to the world? As a self-published author, my brand is my authorship and my business is my books. I talk about writing, vampires, self-publishing here on this blog and even on Twitter. I try to keep subjects on topic with my brand.

But now and then, I just have to open my mouth. Granted, I have hard time running away from political debate, so that’s my weakness there. It also doesn’t help that the United States is a heavily polarized nation, and I just have to talk about this and voice my opinion as a citizen of a democratic country.

But I’m also an author. I have books to sell. If I were to talk about politics or social issues, even occasionally, will I be ruining my brand? Just say one thing that someone may not agree with, and you can lose a potential reader or someone who may like your books may vow to never read them again if they know what political beliefs you have.

During the 2012 election, like the majority of Americans, I was biting my nails over who would win the presidential race. A few times, I retweeted tweets related to the election. On election night, I used Twitter again to voice my anxiety over who would win and to chat with others feeling the same way. I found it easier to do this on my author account than on my personal Facebook where I risked pissing off friends and family.

Unfortunately, tweeting my political beliefs that night did not save me either. By the end of the week, I received an email from Qwitter, telling me I had lost several followers, the most I had lost before and since. I recognized some of the names, and I could only conclude that they were upset about which presidential candidate I was openly supporting. This is because I saw their tweets where they voiced their praise for the opponent.

I was silent until earlier this year, when the gun control law did not pass. I was livid that despite 90% of Americans wanted to see more legislation on owning guns, Congress didn’t seem to hear that. I saw a quote in article that criticized the use of assault weapons, and tweeted it. Instantly, I was verbally attacked on Twitter by four apparent gun-users. And I mean, attacked!

I’ve always wondered how much of an author’s platform and branding should include their personal beliefs on politics, religion and social issues – the three categories that can almost stir a civil war. I tend to think that if it is related to an author’s books, then yes, shoot your mouth off. If you have a novel that addresses human trafficking, let the world know your feelings about it. If you are writing a book about a family struggling with the difficult economy, fire away.

Now, if you are not addressing anything controversial in your books, should you still blog or tweet about controversial topics? Personally, I think if you really want to because you care so much about them, go ahead – but don’t lose sight of your authorship. Tweet or blog every now and then about them. Basically, would you want to be known for your books or for your political views?

Now if you live in a place that is politically divided – like the great U.S. of A! – you can expect backlash for at least someone. I’m sure most readers don’t let an author’s political views deter them from reading their books. Unless, of course, those novels talk about those views.

Famed author Anne Rice has a Facebook page where she discusses religion and politics with her fans on a daily basis. While this is a great way for an author to converse with his or her fans, it can alienate some of those fans. I’ve seen some comments on Anne Rice’s page where fans seem very much offended by her views. I also once had an acquaintance who did follow the page, but isn’t anymore. That acquaintance had conservative views on religion and politics, so I guess Anne Rice’s Facebook page was too much for her. Whether she still wants to read Rice’s books or not, I don’t know.

As an author, I don’t want any of my readers to refuse to read my work if they disagree with my views. If they choose to do so, well I cannot stop them. I don’t think it is fair to do that, but given the political climate in this country, it is not surprising that this can happen. Heck, back at my hometown on Staten Island, there was a convenience store where the owner had posters in his window denouncing liberal politics. While most didn’t care, there were some who refused to shop at his store. All businesses risk a lot when they get too political.

So yeah, there’s a lot of issues to deal with in the world and nearly all of us have an opinion on something, and we have every right to express those opinions. But I also think we should not forget why we set up our blogs and social media accounts in the first place.