When I was in junior high, I read a lot of vampire stories. I read books by R.L. Stine and Anne Rice. I even attempted to read Bram Stoker’s classic novel, but could not get into it. But one book that stands out during my vampire book days was “The Last Vampire” by Christopher Pike.

Here’s an overlook of the book, and the other five that followed it in a series. The books are about Sita, a 5,000 year old vampire who is, seemingly, the one and only vampire left on earth. Although she is tiny, she is incredibly beautiful, extremely strong and quick, and falls in love quite easily. The latter means she falls in love with the son of a detective, mainly because she believes the son, Ray, is the reincarnation of her husband from 5,000 years earlier, Rama.

But Sita is not the last vampire around; her maker, the world’s first vampire, Yaksha, is still out there and is looking to kill her to rid the world of vampires. Yet, Sita survives Yaksha’s attempt and turns a dying Ray into a vampire, to save his life. This breaks a promise she made to Krishna that she won’t create any vampires, and thus will always have Krishna’s grace. 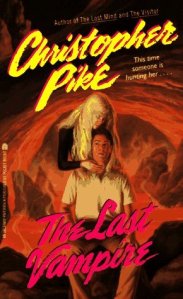 So begins the adventures of Sita, Ray and Yaksha. The adventures involve a trip to Las Vegas, flashbacks to Renaissance Italy, massive explosions, the death of Ray and Yaksha, Sita meeting a non-vampire who managed to live hundreds of years through alchemy (I forget the character’s name), and being changed back into human form. She also winds up pregnant, Ray comes to back to life as some sort of ghost, the baby grows at an abnormally quick pace and later turns out to be some sort of demon that Sita has to destroy. In the end, Sita meets with space aliens – or something like that – and is able to go back in time to kill Yaksha when he is born, and thus, never becomes a vampire and returns to life as though she never lived for 5,000 years.

At the very end, readers learn that Sita’s human nerdy friend, whom she cures of AIDS, had created the story of Sita in order to cope with having full-blown AIDS, and readers are to believe that the story of the last vampire was a product of his imagination.

Now that I think of it…

I am aware that the series is being continued, years after the sixth and final book was written. I am not sure if I will ever take a peek at any of these books, especially now that I am aware that The Last Vampire series doesn’t sound very plausible. I mean, it certainly isn’t akin to the Harry Potter series in terms of storytelling.

But I do remember a few years ago, during the Twilight craze, walking through a bookstore, and seeing The Last Vampire being marketed as a new series called Thirst. I was thrilled to see that book cover, and thrilled to have memories of my early-teen days come back to me.

Those memories included chatting with friends about Sita and her adventures, and what will happen to her next. It seemed Christopher Pike’s vampire series was widely read in the mid-90s. Also included was my introduction to Hindu mythology, which these books are heavily based on. It showed me a new world, which back then was largely influenced by Catholicism.

I also grew fascinated with vampires, and wrote little short stories about myself becoming a vampire and what sort of adventures I would have as one.

Clearly, The Last Vampire series influenced me, as imperfect as they are. They also influenced the way I created my vampires. For example, I made my vampires walk around in the sunlight, depending on how old they were. This is all thanks to Sita, who could also walk freely in the sun, although she would be exhausted later on. In addition, my vampires, like Sita, do not sleep in coffins.

Even though The Last Vampire series is not the best one out there, it still has a special place with me. It made me fall in love with vampires, let my imagination run wild, and influenced me as a writer and storyteller. Creating stories are like building blocks, and sometimes there’s just that one book that leads to the foundation stone being placed. For me, it is Christopher Pike’s The Last Vampire series.