I was browsing WordPress blogs this morning when I came across one that had a link to an article on AfterElton.com that discussed how vampires are often depicted as bisexual, and that is not a good thing.

The article, written by Brent Hartinger, pointed out that when vampires are bisexual, particularly on TV and in movies, is usually represents how evil the creature is. In other words, the vampire is so amoral and deprived, it also has sexual perversions, if one considers bisexuality or even homosexuality to be so. 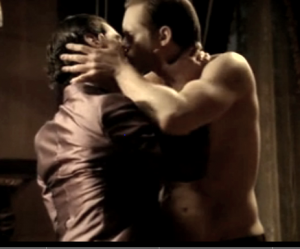 Click here for article on vampire sex by TrueBlood.net

For example, the Cullen clan in the Twilight saga are morally good and heroic, and they are also all heterosexual. But look at True Blood. The villain Russell Edgington is gay and has a boyfriend in season 3 – until Eric kills him. Eric is seen as morally ambiguous throughout the whole series, and becomes sexually ambiguous when he needs to do evil, such as killing Talbot to avenge his Viking family’s murders. Also, Bill was the good vampire for most of the series, and was depicted as heterosexual – with the exception of a scene with shape shifter Sam Merlotte, which disappointingly turned out to be a dream.

Here’s a quote from Hartinger’s op-ed to sum it all up:

Suddenly vampires have stopped being bisexual. The more “good” they are, the less morally dubious, the straighter they’ve become. It’s an almost perfect correlation!

Reading this article shook me. In my book, The Dark Proposal, I have my vampires as bisexual, living in a free-love existence. I never once thought that by giving them fluid sexuality, I was showing how depraved they were. Yes, my vampires are the evil kind, and not the sweet and sensitive ones. But I never once thought that by allowing to be more sexually ambiguous, they were representing their moral sense.

Honestly, I was influenced Anne Rice, who’s vampires are bisexual. But I also didn’t do that just because Anne Rice herself did. My justification of creating bisexual vampires came from how I would think it would be for a vampire, once it realizes it is no longer human and is living apart from humanity. I would think by living in a different world, human rules no longer apply, especially when you realize you have supernatural skills and have found your own key to immortality. Vampires don’t answer to humans, so why should they follow their rules?

In that situation, I would really believe fluid sexuality would be the norm. The reluctance or fear to want to kiss and touch someone of the same gender would be gone. There will be no judgment if one decides to have a same-sex encounter or even experiences homosexual love. After all, they are superior to humans – that is the attitude my vampires have.

I never looked at vampire sexuality as representative of their morals. I always looked it at as part of the sexy side of being a vampire – that no one, male or female, can resist you, and you are open to anyone who interests you, gender be damned. You have no sexual hang-ups, you are true to yourself and don’t care what others think – mainly because you are separate from humans and you look down at them anyway.

But this article has me thinking, especially how I write my two follow-ups to The Dark Proposal. The ideas I had won’t change drastically now, but I will be more aware that some people are not pleased with vampires having fluid sexuality. The LGBT community has been demonized enough, and I certainly don’t want to give readers the impression that I am part of the demonizing crowd. I stand by my reasons for making my vampires bisexual, but I see there are other angles to examine.